Translating is a good way to remember the verb tenses, expressions and vocabulary.
First translate the sentences without looking at the solution, and later you can compare it with my translation.
If you have any questions, ask me

And remember...it´s also good to listen to the lyrics of songs. It´s fun.


Listen to this great song: It´s my life
https://www.youtube.com/watch?v=9SKFwtgUJHs

It´s so important to read, listen and speak in English to get the feeling of the English language.
It´s fun to learn expressions because people use them all the time. 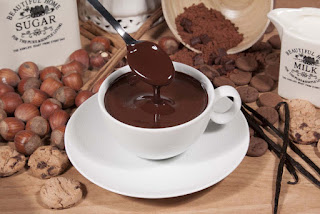 So, do you think that chocolate is good for your health?
Well, I don´t think it´s bad if you eat a few pieces, and not the whole package.
And, it´s also a good idea to brush your teeth after eating chocolate in order not to have any cavities and have to make an appointment to see the dentist.

Anyway, the rest of this article was written by the author below the text

Does that make dark chocolate sound like a superfood?
Maybe so--especially when you factor in the effect eating dark chocolate can have on how happy you feel.
Recent research from University College London studied over 13,000 people and found that individuals who reported eating any dark chocolate in two 24-hour periods were 70 percent less likely to report clinically-relevant depressive symptoms than those who ate no chocolate at all.

But before you reach for a candy bar, keep in mind there's a catch: All participants ate half an ounce of chocolate per day.
And there's another catch: If you're watching your weight, even a small amount of chocolate has a calorie impact.

And there's one more catch, but this time a good one. Since some dark chocolates contain as much as 85 percent cacao solids, you might be tempted to think venturing way over into the dark side will make you even happier.
Yet the evidence suggests mood improvements only occur if you enjoy the chocolate you eat, suggesting the experience of eating the chocolate is a factor as well.

Sure, the chemical ingredients can make an impact. But so can the taste.
All of which means the relationship between dark chocolate and mood may be more correlated than causal. As the researchers say:
This study provides some evidence that consumption of chocolate, particularly dark chocolate, may be associated with reduced odds of clinically relevant depressive symptoms.
However, further research is required to clarify the direction of causation--it could be the case that depression causes people to lose their interest in eating chocolate, or there could be other factors that make people both less likely to eat dark chocolate and to be depressed.


But then again, past studies found that consuming chocolate may help improve your mood and make you feel calmer and more content, partly because dark chocolate stimulates the production of endorphins, the chemicals in the brain that create feelings of pleasure. And dark chocolate also contains serotonin, an antidepressant that can elevate mood.

The technical article was written by Jeff Haden, 2019


The problem with Spain today and for a very long time is that Spain has never really been United as a country and people don´t seem to feel very proud of their great country.
In my opinion, Spain is one of the greatest countries in the world, and its rich history proves it.
Spaniards speak the same language. Spanish people are friendly. It´s a beautiful country and it has the best food in the world...so where´s problem?

The most important reason is because the Spanish national anthem doesn´t have any words, only music.
How can Spaniards express their feelings and their sorrows?
They need to sing their national anthem like other countries in the world?
How can they be proud, be patriotic and feel hope of their country if they can´t sing it?

The U.S.A. National Anthem has words and Americans love to sing it before a football, baseball game, a basketball game or any other important events.
IT UNITES PEOPLE and they feel patriotic and they love their country.
It gives the people everything they need to be happy.


On the other hand, Cataluña also has their own National anthem aside from the the Spanish national anthem......but the difference is that the Catalan anthem HAS WORDS.
People can sing it and it makes them more patriotic, and it unites people.

This is one important reason why there has always been a barrier between Cataluña and the rest of Spain.
People love to sing because it makes them feel better. It´s more natural to sing than talk so much.
Therefore, this makes the Catalan people feel prouder and more patriotic....which is very important.

Perhaps, this can be a very important reason why there has always been conflicts in Spain. A lot of Spaniards perhaps don´t feel so united and proud of their country.


Valencia also has their own National Anthem. People also feel very proud of being Valencian.
https://www.youtube.com/watch?v=MeGO2MTjZ28

So, what´s the solution to make a Spain United?
It´s obvious, put words to the Spanish National Anthem so people can sing and feel good, happy and proud of being Spanish...and it doesn´t matter what part of Spain people are from.

The beautiful country of Galicia also has their anthem
https://www.youtube.com/watch?v=hmXAB9rvFWE

And let´s not forget the Anthem of Andalucia
https://www.youtube.com/watch?v=K-KUzxEy668

And of course, The Euskadi anthem
https://www.youtube.com/watch?v=hUXbEwGXDlU

The people of Spain must unite, feel proud and patriotic and be happy again.
People are not born to suffer, people are born to live a happy and rewarding life in this beautiful and prosperous country called España.

Spain can be powerful again and make important changes in the lives of people and their way of life.

Or there is this Spanish National Anthem
Perhaps there are people who don´t like it, but it has words which make sense.

I´m back. I´ve been doing a lot of things and I didn´t have time to sit down and make an exercise for those who like to translate as another way to learn the use of English
It was very hot this summer and I didn´t feel like doing many things.

At the moment, I´m having breakfast while I´m doing this exercise.
It´s very windy today, but not as much as yesterday. At least it´s sunny.
Oh my God! It´s already November, and in no time time at all....Christmas.
How time flies!

As I live in Spain, I see that there a lot of serious problems in Cataluña as well.
Half the people want to be independent from Spain and the other half don´t want to.
In the end, I have no idea what´s going to happen.
All I know is that what I saw on television a few weeks ago, it seemed that Barcelona was in war.
It also seems that the British people don´t know what to do with their lives either.
Anyway, I don´t think they´ve ever felt very European.

Of course, the big reason for so many conflicts in the world,........are politicians.

How about Global warming? I sometimes ask myself if people would realize that Earth has a very serious problem, and one day it will be too late to do anything.

Instead of so many absurd conflicts among people in Spain and the rest of the world, we should learn to live in peace and save our planet together and united.
.

Well, it´s already a quarter to eleven and I´m going to translate the text into English.
As you can see, I use expressions and the different verb tenses.It might be a little difficult, but that´s the way to learn more.
Do what you can and have fun.
Published by Amof No hay comentarios: